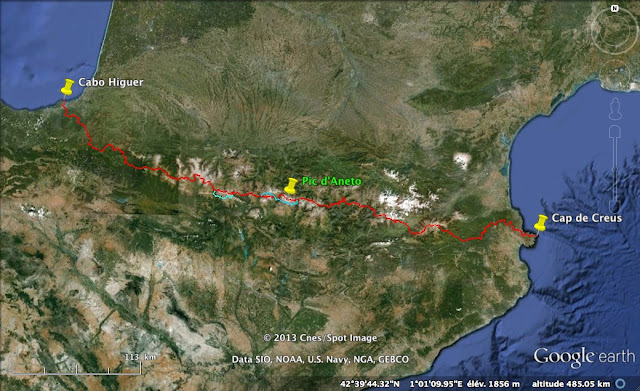 Though I didn't found the time yet to post the pictures and story of The North Face Lavaredo Trail I ran last june, I quickly wanted to inform you about this amazing project, I've set my mind on.

The Pyrenees are a mountain range I've always been very attracted to. Each time I had the occasion spending some time there, my love for the region has grown. There is a certain 'wildness' about those mountains. Years ago as I walked the GR20 through Corsica, I came up with the idea that one day I would walk through the Pyrenees, either on the french side following the GR10 or the Spanish version along the GR11 or in case the weather allows it switch over on the HRP (High Route Pyrenees) These paths are normally done by hikers with a lot of time, marching between 45 and 60 days to go from the Atlantic Ocean to the Mediterranean Sea. That much time I don't have, but is this really a problem ?

Since I realize that I'm able to run far, I've dreamed of a voyage on my own two feet, running from A to B throughout an outstanding part of nature. As I started reading about the region and consulted the topographic maps, the track took form.
By the end of july, I will run this voyage, starting at de Mediterranean Sea at Cap de Creus, passing through some of the most beautiful valleys on earth, over the highest peaks of the range, to arrive at Cabo Higuer in Irun. 840 Kilometers and almost 60000 meters total ascent. Time to do so, somewhere between eleven and sixteen days.

I've designed my own path, switching between the GR11 and the HRP, leaving them for the ascent of the Aneto, Pico the Posets, Monte Perdido and Marboré. Off course this depends on weather conditions and how I feel about it at the moment of truth. Alternatives have been studied to avoid the high peaks in stormy conditions or in case I don't feel fit enough after all those miles to climb a mountain over 3000 meter. This is not a race, but a way to travel as fast as you can on your feet. I'm not trying to break a record here as there is no fixed route for this.

"Weather for expeditions" will be sending me through vital information about the weather conditions. The high peaks of the Pyrenees can be very stormy and surprising. Meteorologists Fritz Buyl and Marc De Keyser, already guided many climbers, pole expeditions and sailors around the world. I can totally rely on them.

For as far as I know, only one person on earth accomplished a similar incredible challenge. A couple of years ago Kilian Jornet, ran from Cabo Higuer to Banyuls in less then 8 days. We would almost get used to it, but whenever Kilian does something, the 'wows' and 'respects' fill the air. Reading his story in his book 'Courir ou Mourir' has been very inspiring and made me feel already out there. I'm by far not looking to break a record, but look forward to being out there.

I'm convinced running brings us closer to nature as well as our own nature. I daily experience this. I'm sure it's a lot more natural to run a big distance than to sit still on a chair behind a desk all day, at school or at work. We are so alienated with our human nature that those who run, are often considered 'crazy'. Since I've started Trail-running, I've learned that we are able to so much more. Leaving your comfort zone and trespassing your mental limits gives you a lot more satisfaction then the easy way of life, where everything is just there to consume.

For now I'm counting the days. Sunday morning at sunrise, I'll leave Cap the Creus, for an amazing journey, a personal challenge, never to forget.

In september, you can read the outcome of it. Till then. Best to all of you.